Putting it all together - a case study of a Drum seeding line with bench loader and soil supply hopper.

In this case we look at a vegetable nursery in New Zealand that is looking to secure their  future asset by installing modern machines to minimise labour requirements, while not compromising on quality production.

Often the best solutions don't all come from one company,  or from a single machine. In the case of the Drum seeding line with bench loader and soil supply hopper, over the years there have been many designs, and it's not possible to say one design suits all.

Seeding with modern drum seeders can be very fast, but without  smart design it  can still be very labour intensive, and is one of the most common jobs in the nursery yet handled so differently from nursery to nursery, so it is important to make the systems as efficient as possible. 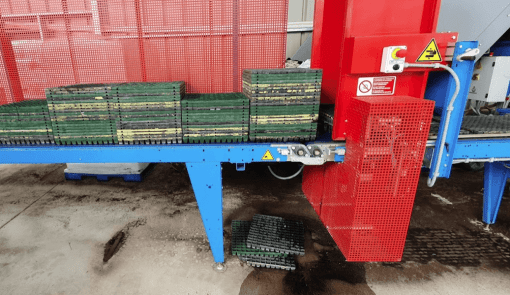 Working with the design team at Urbinati and taking into account the request from customers asking for maximum efficiency, visiting nurseries, and considering their layouts  we have some great solutions.

On this drum seeding  line we start with a tray dispenser suitable for heavy plastic trays. To say a little about the trays,  it is important to start with a quality tray designed specifically for the crop. This line is designed for the TS-144 tray, as it is one of the best trays available for vegetable production. The tray is not only designed to produce biologically great seedlings, it is also a long lasting tray that due to some subtle features makes it ideal for automation, in the nursery and in the field. Back to the tray dispenser,  this comes in two parts, the feeding belt, that holds stacks of trays and the pneumatic de-nesting machine. This model can dispense a wide range of trays, form vegetable seedling trays to those used by forestry seedling producers,  but we normally optimise the dispenser to suit the tray we are working with.

While it is  doing a very simple job, delivering one tray after another, its very clever design ensures the output is matched exactly as required by the down stream machines.  On a personal note, for more than 25 years I have worked with Nursery automation, and this is the best tray dispenser for heavy trays that I have come across. It's simple, yet has an ingenious design, quietly delivering trays as required, almost in  understated elegance.

It saves in labour and frees up workers to do more productive jobs. The important considerations for working effectively with tray dispensers is to use modern tray designs that are designed and adapted to automation.

The TS-144 tray for vegetables is  30mm deep, with a 400mm x 400mm footprint, so it does not hold a lot of soil, but drum seeding lines process trays at such speed, a soil hopper with some volume is very important to maintain production. 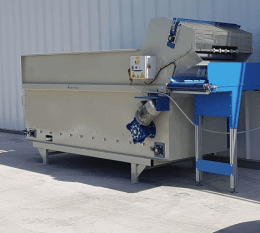 We have chosen the Demtec DEN 6 cubic meter soil hopper for this operation.  It's important to maintain a good supply of soil to the tray filler and ensure there operation can run continually without the need to stop and wait for a hopper to be filled. Because we can hold 6 cubic meters this hopper will only require filling once or twice a day. This means  the hopper can be filled will there are no other workers in the immediate area. This is a huge benefit to the health and safety program, as often hopper filling involves large machines moving around, and can put a lot of dust into the air. 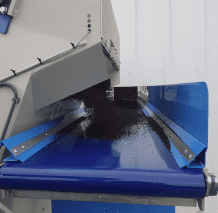 The Demtec DEN has a full width conveyor belt in the base, delivering soil to a full width elevator chain and shovel  arrangement. The supply system is fully automatic, in that as the soil is used by the tray filler more soil is delivered by the Demtec DEN.  In this instance the Demtec DEN is started and stopped with probes inside the hopper of the tray filler. In many situations we also use a photo eye to detect the soil level.

One of benefits of the supplying soil automatically is that the load in the tray filler hopper is not fluctuating widely, so the tray filler does not go from over full to almost empty as it would in many other systems.  The tray filler works more efficiently and the life of the tray filler is greatly extended simply because we can control and reduce the loading of the hopper.

Urbinati have a good selection of tray fillers. The design differs to produce the best results for the tray that needs to be filled. While any tray filler can fill a range of trays, some tray fillers are better suited to certain trays.  In this case we are using the Urbinati RC65, as it works incredibly well with TS- trays,  In choosing a tray filler we often send a sample set of trays to the Urbinati factory, and they run a tests through the tray fillers to see what tray filler works best for the tray. It is also important to take into consideration the soil mix that is being used, and end result the customer is looking for. Fortunately between Urbinati and Transplant Systems there is a lot of experience, local knowledge and understanding of how the tray filler, the tray and the soil all work together to produce the result the customer is looking for.  We also listen to our customers experience as often they know what dose not work. In this case we have a huge number of growers working with the Urbinati RC65, so we know it works well.

The tray filler is designed to start and stop automatically as required by down stream machines, and internally the tray filler has a number of sensores  so that it can control the amount of soil delivered to the tray or stop the belt if the trays stop coming from the tray dispenser.

This is the heart of the operation, where speed and precision come together with a skilled operator to produce tray after tray with seeds place precisely in the center of the cell and at the same depth all day long.

Drum seeders, features and settings are subject on their own.  In this case we have used the Urbinati Ypsilon Seeder. Unbelievably it what is now considered an entry level seeder yet uses a touch screen and modern PLC to program a wide range of features, and also take control of the rest of the seeding line, communication with upstream and downstream machines.

The seeder signals the tray filler to deliver a tray,  once it has a tray on its belt, it tells the tray filler to wait a bit to produce a small gap between the trays. This helps for cleaning the leading and trailing edge of the tray.  We can also use blowers to remove soil on trays that have lips.  The tray arrives at the dibble. The dibble is crafted to suit the tray and has connicle pins. Being a powered dibble it is programmed to start at precisely the right time, and match it speed to the speed of the tray, placing an indentation in every cell, to the same depth, position and precision on each tray.  Because it powered, it does not flick soil like some of the older type systems. The depth of the dibble is easily adjusted by a crank handel. On  other Urbinati models depth control is  electronic.

The tray moves to the sowing drum.  As you would expect there are a wide range of seeds sizes and shapes, so there are number of options for sowing drums.  Given this seeding line is predominantly sowing vegetables, and many of the seeds are conveniently coated or round by there very nature this seeding line only needs a 2-3 sowing drums for the entire production. The sowing drums can be easily swapped, so it only takes 10 minutes to set up for a new batch of seeding.

The sowing drum is  attached to a vacuum pump, and compressor. Both located out side the sowing room as they tend to be noisy machines, and not great to work alongside of for extended periods.  The drum is predominantly under vacuum, that can be varied to suit the seed pick up. It has a series of holes in it so that the seed gets sucked onto the drum.  As it rotates through the seed hopper it picks up a seed on every hole.  The hopper vibrates and oscillates so that the seed does not settle. This helps with the seed pick up.
Sometimes two or more seed will suck onto a single hole, so we have nozzles placed above the drum to blow off the excess seed. We have a number of other options for controlling the seed on the drum, but that's another story.

As the drum rotates, the bottom dead center the row of holes transitions from Vacuum to pressure releasing the seed to the tray.  With the precision of the PLC program the  seed is delivered at exactly the right time compensating for speed the tray is moving, the weight of the seed  and the speed of the  drum rotation to place the seed accurately exactly where it was programmed to be.  It   takes  about 5 seconds to sow a TS-144 tray. Of course the drums can be programmed to multi  seed,  or drums can have multiple holes for each cell if you require more than one seed per cell.

As the tray moves away the drum waits for the next tray, normally 2 seconds behind the first, and repeats the process, on this machine running around 400-600 trays per hour.

After seeding there is a covering unit designed to dispense vermiculite over the surface of the tray covering the seed as required.  It starts and stops as required for each tray, and the thickness of the coating is set from mechanical adjustments, and from the seeder PLC.

After covering the seed it goes through the watering unit,  in this case  very simple, it just puts a shower of water over the tray, as the tray passes under, but its also very complex, as the water is turned on an off automatically minimising wastage, and the flow of water and speed of tray travel can be adjusted according to the amount of water required.

We have a stacker on this line, so that if you want to you can program the machine to produce stacks of trays. The offsetting feature means the trays can be stack in such a way they don't nestle down into the cells.

Normally we don't stack the tray, we send them directly to the bench loader to be automatically loaded on to the rolling bench system. The benches have been specifically design with KG Systems to facilitate the automation. This machine is also programmable so it can work with  a wide range of nursery requirements. We automatically acumulate  rows of trays and push them onto the bench. The process has built in buffering  in and designed so that the seeding operation is not stopped while bench loading and moving is executed. Once the bench is loaded it is automatically sent out of the bench loader and an empty bench moves in.  The great thing about this system is it removes the heavy lifting associated with sowing lots of trays, and it reduces a seeding line sowing 600 trays per hour to 1-2 people , that have an easily manageable job.